Entanglement is a quantum phenomenon describing a shared quantum state over multiple physical particles. Very puzzling is the fact that these particle can be separated by very large distances and yet behave as being in communication with each other.
Being a very powerful quantum resource, entanglement is employed in quantum computing as well as quantum communication. It also is the basis of quantum teleportation making a science-fiction dream come true.
But let’s not get entangled now. Instead, we exercise a nice cake for the winter season, which in fact is quite tangled.

For the yeast dough, first warm up the milk a little. Sift the flour into a bowl, form a little dip in the middle and crumble the yeast into it. Add 1 tablespoon of the sugar to the yeast and add a little warm milk. Cover the yeast-milk mixture with a bit of flour and leave to stand for about 15 minutes. In the meantime, melt the butter and let it cool.
When the yeast is “activated”, add the remaining ingredients for the dough to the bowl and knead into a smooth dough. The dough should almost completely detach from the bowl edge (should not stick too much). Then let the dough covered for 1-2 hours to rest.
For the filling, toast the hazelnuts in the oven at 180 degrees under top/bottom heat for about 5-8 minutes. Allow to cool briefly and chop finely (with a food processor). Boil the milk together with the sugar, cinnamon, vanilla extract and lemon zest in a small saucepan. Then add the ground/chopped nuts and heat under stirring for 2 minutes. Remove from the plate and let cool down.
When the dough has doubled its volume, roll it out on a floured work surface to a rectangle of 40×30 cm. Spread the hazelnut mixture onto it.

Roll the rectangle up from the long side (to get the longest possible roll). Cut the roll lengthwise, to split it (see photo below). Intertwine the two halves around each other to form a braid. When finished, take the ends together and hide under the so-formed braid.
Place the braid on a baking sheet covered with baking paper, cover it and let it rest for another 15-20 minutes. Heat up the oven to 180 degrees top/bottom heat. When the braid has gone a bit again, beat the egg yolk together with the milk and brush the braid generously with this mixture.

Bake the nut-braid in the oven, on the bottom rail, for approx. 45 minutes. At the end of the baking time mix the powder sugar with a bit of milk. Remove the nut-braid from the oven and allow it to cool briefly. Brush the still warm nut-braid with the sugar topping. 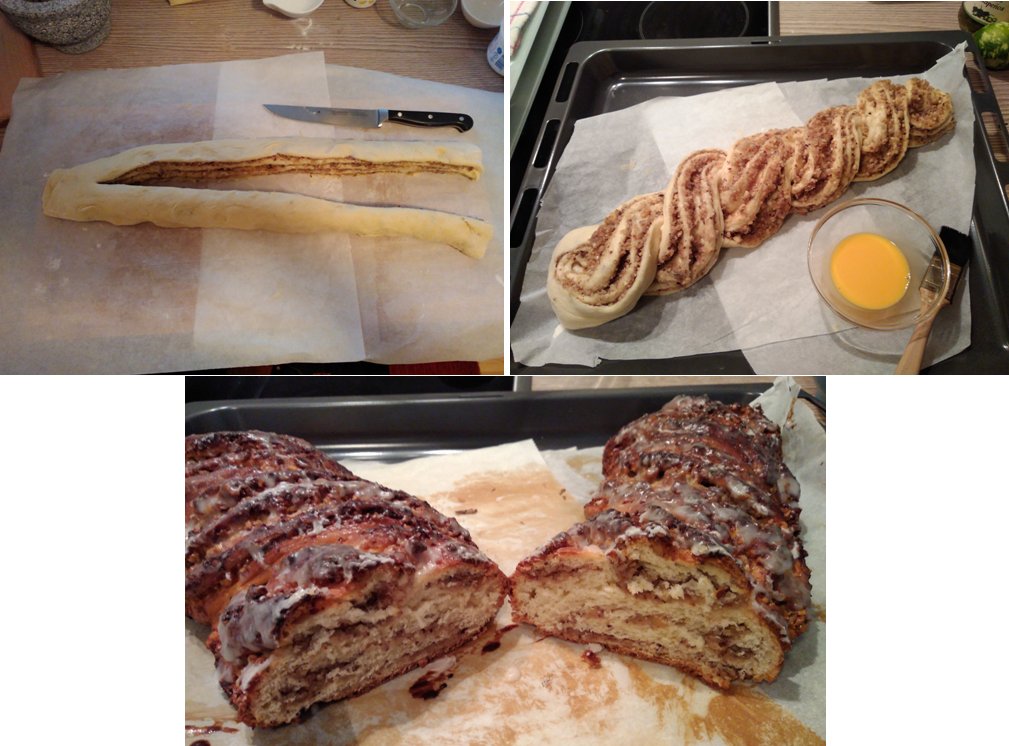