Squeezing and its applications

Since the beginning of time and the creation of mankind, Santa Claus always worked hard to make wooden toys and plan with his quantum goblins friends the most efficient way to travel worldwide, distributing gifts to all good kids. When modern technologies were not available, he used to keep the kid’s wish list in a safe box and counted on his old fast reindeers to travel worldwide, delivering all kid’s gifts. As the world grew old, more and more kids are sending letters to Santa asking for modern gifts. So he decided he has to find a safer way to store the letters and deliver the gifts more efficiently.

Learning about the advance of quantum technologies, particularly about an integrated squeezing light source, Santa Claus realized he could use this device to perform secure database access. The letters could be stored, with a secure correspondence between the kid’s address information and desired gift. Building big gifts centre distributions worldwide, he could use the same system to automatically perform safe delivery, reducing the reindeer’s hard work. The security relies only on magical quantum mechanical principles, where the Grincheve would not have access without a quantum key.

To implement his secure database centre, Santa Claus reached out for help and travelled to the Uniqorn land. There he found three companions in the form of scientists from the University of Paderborn, Fraunhofer Heinrich Hertz Institute and the Technical University of Denmark who are gathering forces to build a source of squeezed light integrated on a PolyBoard chip. Incorporating a nonlinear waveguide into a polymer chip makes it possible to produce quantum states of light on-chip. This will enable the transport of information in polymer waveguides for applications directly on-chip with easy access to the telecommunication infrastructure. Without the requirement to bring the light out of the chip to an optical free-space setup, it makes the system more robust and resistant to the environment—a perfect solution for Santa Claus’ data centre. 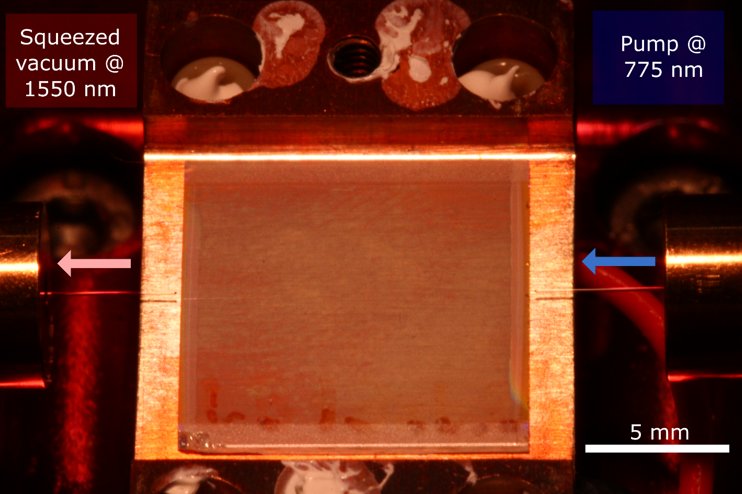 ppLN waveguides for the generation of squeezed states in a PolyBoard chip.