Squeezed light for everyone

Physical experiments are a manifestation of the fascinating curiosity of human beings about the universe. It turns out that our only way to inquire the nature is by asking questions and obtaining answers through experimental-measurements. But sometimes, nature is subtle in its responses and is the goal of human beings to develop new tools to investigate the universe profoundly.

One of the most versatile available tools is the light, which permits the study of the universe at the fundamental level: the world in its small scale described by quantum mechanics. However, the strange world of quantum mechanics imposes difficult challenges to be overcome, but at the same time, new ways of developing better tools. For example, Heisenberg´s uncertainty principle tells that it is fundamentally impossible to determine with finite-precision the amplitude and phase of coherent light at the same time. In other words, using a laser-light as a measurement tool, the precision is physically limited by the vacuum fluctuations in its quadratures.

Since 1980 physicists have been studying and developing new ways to “squeeze” the fluctuations of one of the quadratures of the electromagnetic field, enabling enhanced precision when probing. The researchers at the Technical University of Denmark and Heinrich Hertz Institute are developing a source of squeezed light integrated into a waveguide platform based on the PolyBoard technology. The integrated squeezed light source will be cost-efficient, small, high frequency improved, and easily integrated into an already existent technology. 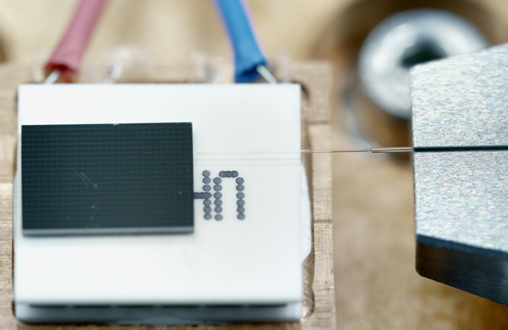