Christmas is at our doorstep: three of four candles have already been lit! But our quantum flame, carrying µ ~ 0.1 photons on average, is ever so delicate. Will it survive the combined hardships of lossy transmission from Alice to Bob and “Eve-il” mail carriers, allowing Bob light the 4th candle in time?

The state preparation and symbol encoding scheme of COW is remarkably simple and summarized in the shown figure.  This reduced complexity makes it very well suited to practical implementations. Alice generates a stream of weak light pulses located at equidistant time slots and maintaining a constant relative phase φ between neighbouring pulses. Within this coherent train, every pair of time slots corresponds to a transmitted symbol: key bits 0 are encoded by an occupied early timeslot, whereas key bits 1 have their late timeslot occupied. To guarantee the safety of the protocol, Alice additionally prepares so-called decoy states at random with a probability pdecoy, with both slots of a pair occupied.

Bob then passively chooses to either decode the sent symbols in his data line or check for any violation of the pulse streams coherence via an interference of subsequent pulses in his monitor line.

The transmitter of the setup (Alice) will be realized in UNIQORN as an integrated system on a chip (SoC), i.e. the entirety of the optical components needed for the state preparation will be gathered on a photonic platform instead of individual bulk components. 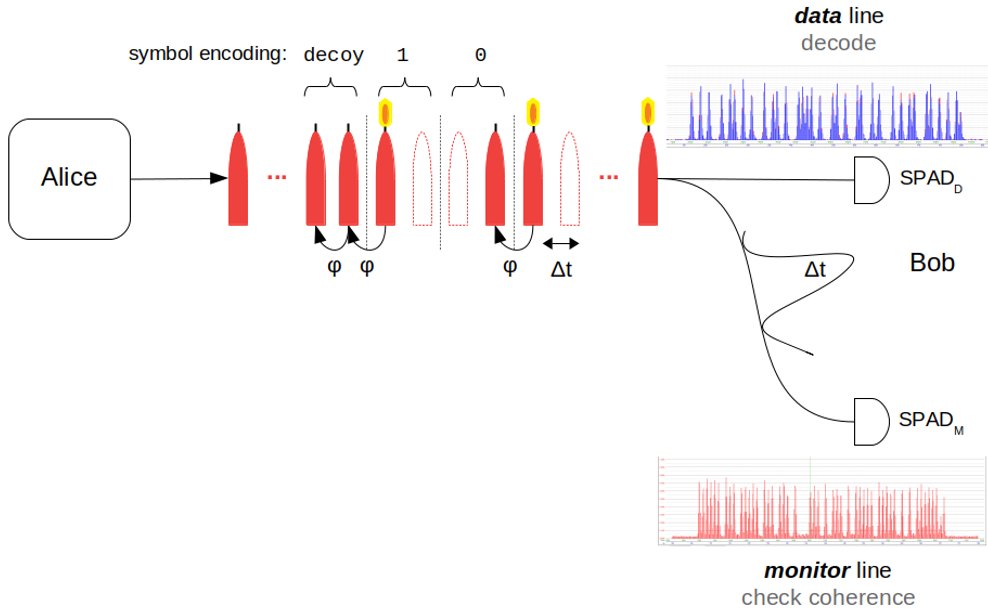